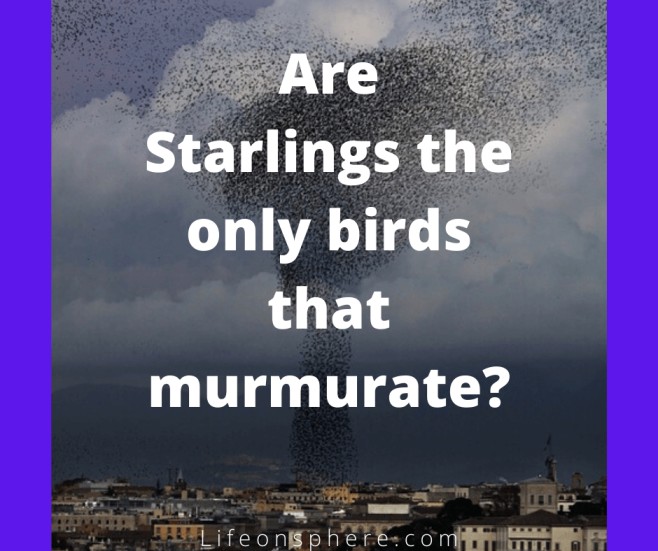 Other animals and birds that murmurate/show swarm behavior

Starlings are most commonly known to show this behavior. Other birds that murmurate are raptors, european honey buzzard, geese, red knots, robins, flamingos, and dunlins. These birds mostly flock together in a V shape to migrate efficiently.

Although Starlings are not the only birds that do it, a murmuration is a term more specifically used for starling flocks. Starlings use murmuration to confuse predators and to keep warm. Most other birds “flock together” to travel long distances and flocking reduces their energy expenditure.

Swarm behavior is exhibited by a group of animals of the same species and size, which move collectively in a direction. Schools of fish also exhibit similar behavior. The purpose also stays the same – to confuse predators or to search for food.

There are several questions that arise – does each bird keep an eye on the entire flock to estimate which direction to fly in next? It seems impossible for a bird to do something so complex.

It’s more likely that each bird measures up with its neighbors. Still it’s uncertain for a bird to know within a fraction of a second to observe and react as per its neighbors. There must be at least some constant involved for these birds to fly so flawlessly. Here’s an interesting question one must ask:

How many neighbor starlings does a starling track?

The answer is seven as per a study. The researcher studied how birds and fish move in sync with each other without any leader or anyone telling the group what to do next.

With careful mathematical modeling, they observed the contribution of a single bird in the group. It was found that each individual has to follow a finite number of others – their neighbors. In the case of starling murmurations, each bird follows the path of seven of its nearest neighbors.

Each bird’s path is uncertain of its own, but each bird anticipates where to head as per the neighbors.

Starlings are songbirds that flock together. They are particularly known for their complex flock patterns. It is surprising how hundreds of these birds fly together in patterns without hitting each other.

How do starlings not hit each other in murmurations?

There’s a significant distance between any two starlings. It prevents starlings from hitting into each other while performing unpredictable flying motions.

Starlings murmurate because it keeps predators at bay. Their flocking patterns confuse any potential predators to prevent them from hunting one out of a flock of hundreds of starlings.