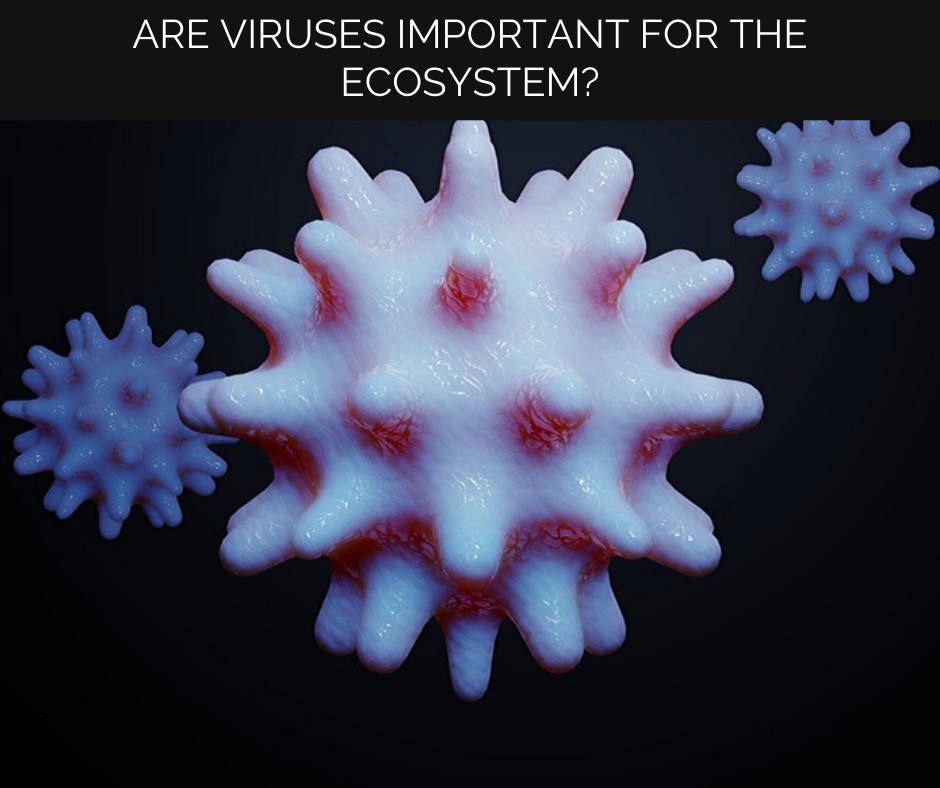 Viruses can interfere in the survival of many living beings, so they definitely do play a role in the ecosystem. It took us rather long to identify that viruses are more than just agents that cause diseases in humans.

Viruses are tiny packages containing genetic information. Whether to call them living beings or not is a matter of debate. They do not reproduce on their own and do not have a metabolism.

They multiply by injecting their genetic material into the host’s cells through a process called transduction. The replicated host cell then replicates other cells.

What role do viruses play in balancing the ecosystem?

Their role in eliminating other microbes and impacting the ecology on a large level was discovered in the 1990s through the work of Karl-Heinz Moebus. Studies have highlighted the role of viruses and how their interaction with the host influences the living communities around them. Until the 1990s, viruses were only known as disease-causing pathogens.

Viruses affect bacteria, fungi, eukarya, or perhaps anything that carries genetic material. Viruses are responsible for 1e25 estimated microbe deaths every minute, thus playing a crucial role in regulating the population of microbes.

Viruses are more abundant in aquatic environments than land. So their role in aquatic systems is important to study. Viruses in natural water bodies consist of mostly bacteriophages that eat up bacteria and maintain the aquatic ecosystem.

The bacteriophage does not harm the plants or the animals in the oceans but prevents bacteria, algae, and phytoplankton from becoming invasive.

Virus interaction with the microbes helps maintain the carbon cycle.

Also, viruses directly impact the bacterial, algal, and fungal growth in the oceans on which depend the cycles that help life sustain on earth.

Viruses further impact the environment by releasing tons of carbon during the process of replicating the host cells. The carbon dioxide is used by other organisms in their local ecosystem as needed, thus fostering their growth.

Viruses attack other microbes in ways that determine microbial diversity. They kill other cells through “lysing”, which means to break the cell membrane. This lets the virus release their genetic material and lets the original DNA of the cell escape into the environment.

Interestingly, bacteria can incorporate DNA from their environment. This is called horizontal gene transfer. The newly developed DNA in bacteria can have varied characteristics. This process has a huge impact on the diversity of the microbial community.

Viruses do not let any microbes dominate

Viruses are good at replicating the microbes that are large in number.

When a microbial species dominates the others in survival and hence population, the viruses replicate their large numbers and kill them off completely.

When another strain starts to dominate, the viruses repeat the process. This lets no microbial community dominate. It’s called “killing the winner”.

This selective nature of viruses when it comes to selecting their host plays a key role in the development of microbial communities.

Viruses outnumber any other type of microbes on this planet. They are responsible for killing 20% of the marine microbes and are an important part of the nutrient and energy cycles.

Can viruses be useful to humans?

Viruses can cause lethal diseases like Malaria, Dengue, Zika virus disease, COVID, etc. Some viruses can also be used to treat cancer because of their ability to selectively kill certain cancer cells.

Although these therapies are alternative and usually the last resort.

They can also be modified to correct genetic disorders and treat pathological illnesses.

To conclude, viruses do cause a lot of human deaths and even pandemics, they have a special role in the ecosystem. We have only begun to understand how important the virus is.

Viruses are the most abundant microbes, especially in oceans and seas and are responsible for a large number of infections taking place in marine life. As a result, they significantly influence carbon, nutrient, and energy cycles. Every lysing that a virus performs has the potential to develop a new life form, which may be more superior than its predecessors. Knowing how much our lives depend on these tiny viruses, their role is worth probing into at a much deeper level.