Does the earth’s magnetic field change over time?

Why does the earth have a magnetic field?

The source of Earth’s magnetic field is the molten iron-nickel inside its core. It is generated due to the Dynamo Effect which generates an electric current in the molten metals, which gives rise to magnetic fields.

Earth’s magnetic field comes from dense molten metals in the earth’s core. Right now, the magnetic north pole is somewhere near 86.54 N 170.88 E, in the Arctic Ocean. As of 2020, it is moving east towards Siberia. While the geographic north pole is fixed at 90 N, 135 W.

For the purpose of simplicity, it is approximated that there is a bar of magnet inside the earth at an angle of 11 degrees to the geographical axis.

Although the magnetic poles are a bit more complex than the fixed north and south poles of the supposed bar magnet.

The magnetic poles of the earth are never stationary but constantly moving at their own rates. Right now, the magnetic north pole is shifting towards Siberia.

Has the earth’s magnetic field reversed in the past?

Yes. Ever since the earth came into existence, the magnetic poles have flipped over hundreds of times, scientists estimate. The latest complete reversal happened about 770,000 years ago. It took about 100 years for the magnetic poles to “settle”.

If no reversal occurs for a period of 10 million years, it’s called a superchron.

How did we find out that geomagnetic reversals exist?

Scientists first found out that geomagnetic reversal occurs after observing certain magnetic rocks that were stuck in a position opposite to they should have been.

What are some precursor signs of geomagnetic reversal?

When will the next magnetic flip happen?

It can’t be predicted. It may happen today or in 200,000 years. Till now, the rate of magnetic flips has remained inconsistent. 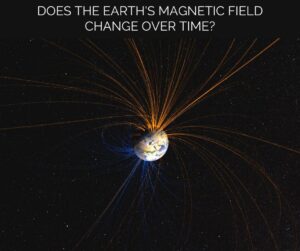 What will happen when the magnetic field shifts?

As per the fossil fuel records, magnetic field reversal does not impact living beings. It will take almost a century for the poles to complete the shift. Meanwhile, the earth is left with almost zero magnetic field. Here are some things worth thinking about:

previousAre starlings the only birds that murmurate?
nextDo viruses play a role in the ecosystem?