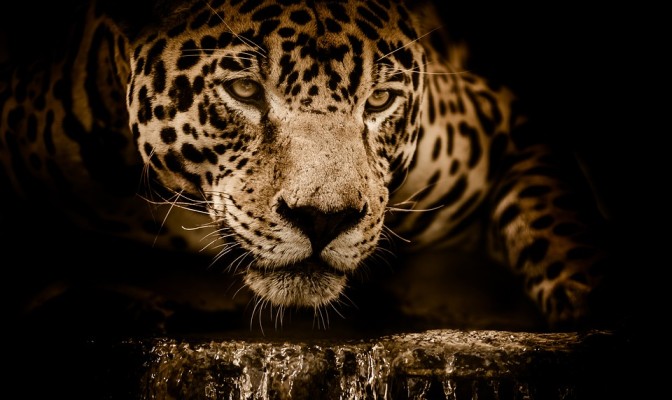 Jaguars (Panthera Onca) are the largest feline in North America and the third largest felines in the world. Find more useful facts about Jaguars here.

What is the size of a Jaguar?

Did You Know: Jaguars have larger paws than other bigger cat family members?

Jaguars are muscular cats with yellow-brown fur and black spots. Their weight is approximately close to the average human weight.

The dark spots on leopards’ skin are simply circles with dark outlines. Jaguar spots are circles with a dot inside them.

They are larger than puma (mountain lion).

Jaguars have short muscular legs that help them climb, crawl and swim efficiently. Their tail is also shorter than mountain lions and leopards.

What does the name “Jaguar” mean?

“Jaguar” word is derived from the native word “yaguar” which means someone who can kill in just one jump.

Yes, jaguars make excellent swimmers due to their short, thick and muscular legs. They can swim to catch fish, turtles and even caiman.

What do Jaguars eat?

Jaguars are opportunistic hunters and can eat almost anything. Depending on where they are located, their diet may consist of capybara, anteater, crocodiles, monkeys, deer, frogs, and snakes.

Do Jaguars have predators?

Jaguars are on the top of the food chain and do not have any predators. Although if an anaconda is powerful enough, it can eat a jaguar.

More than anacondas, humans are dangerous to Jaguars. Humans hunt jaguars for their fangs, coat, and fur. Further decreasing forests have limited Jaguars to a small area.

Yes. Jaguars may use roaring to find a mate. Jaguars make other sounds too like mewing and grunting.

What other sounds do Jaguars make?

Jaguar’s most commonly heard sound is called a “saw”. It sounds like a long bark or the sound of wood sawing. When with each other, Jaguars make friendly sounds of snuffling.

Jaguars do not purr. The reason lies in a bone in the throat called hyoid. This hyoid bone in your domestic cat is much firmer and rigid. When a sound is made in the voice box (larynx), this hyoid bone vibrates at a low frequency in cats and generates the purr sound.

However, in big cats like jaguars, this hyoid bone is less firmly attached to the voice box (larynx). When a sound is produced in the voice box, the hyoid bone vibrates the jaguar produces a deep sound.

In which countries do Jaguars exist?

What habitat is best suited for Jaguars?

Jaguars love to live in wet lowlands and tropical rainforests. They are most usually found living near rivers and lakes. They can also live in deciduous forests and grasslands.

Where did the American Jaguars come from?

Paleontologists believe that the modern American Jaguars are descendants of Asian Panthera species that reached North America through the Bering Land Bridge more than 300,000 years ago.

How do Jaguars kill?

The killing style of Jaguars is unique among cats. Jaguars prefer to wait in ambush than chase their prey. They can hide in a treetop and leap on a passing prey suddenly.

Jaguars strike their prey with a strong sharp bite on the neck which blocks the airflow and kills the prey.

Jaguars may also bite in the skull to kill the prey. They have a sharper bite than any other cats like puma or leopard. Their sharp bite can even pierce through the skull. They usually use the skull bite to hunt larger prey like caiman or tapir.

Their strong bite also allows them to crack open hard turtle shells of even leatherback turtles.

The spotted pattern on the coat of a Jaguar is unique to each, just like human fingerprints!

No. Jaguars avoid humans at all costs and run away as soon as they catch the human scent. In fact, among the entire cat family, Jaguars are least likely to attack or eat a human.

How long do Jaguars live?

The average lifespan of a Jaguar is 12 – 15 years in the wild. In captivity, they can live longer.

How do Jaguars socialize?

Jaguars mostly spend their life in isolation. The only time you’d see two or more than two Jaguars is when they are the mother and the cubs. The female Jaguars do not allow males to be around their cubs fearing the male would eat them. Mother Jaguars raise their cubs for 2 years.

Jaguars are territorial and avoid entering the other Jaguar’s territory.

Yes. The latest conservation status of Jaguars is Near Threatened. The two biggest reasons for the decreasing Jaguar population are hunting and habitat destruction.

As of today, there are hardly any Jaguars left in the USA, most of which were killed by humans between 1990 and 2016.