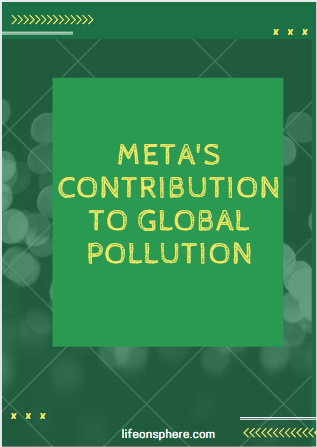 Meta’s contribution to global warming has raised many questions, and it has come under the scanner for being one of the biggest companies in the world. It has been asked time and again about its thoughts and endeavors to reduce its harmful emissions. Let’s take a look at its future aspirations, current initiatives, and innovative measures.

Meta claims that its data centres are among the most effective in the world and prioritises water stewardship throughout all of its operations. Meta declared their intention to become water positive by 2030 in 2021. Meta will therefore recycle more water into the environment than it consumes

In the same electricity grids as its data centres, Meta has contracted for more than 7.0 GW of new solar and wind energy since signing its first wind deal in 2013. This is enough to power more than 1.6 million homes in the United States. One of the biggest corporations in the world to purchase renewable energy is Meta.

Through capital expenditures, operating costs, and direct labour, Meta’s investment in renewable energy significantly boosts local economies. According to a survey by RTI International, nearly 40,000 jobs and $4.2 billion in GDP were supported by these renewable energy projects during their construction period (2014–2022).

More than 850 million gallons of water will be replenished annually thanks to investments made by Meta in water restoration initiatives. These initiatives will have already recovered 595 million gallons of water in areas with severe water stress by 2020. Particularly in areas where there is a shortage of water, these water restoration initiatives provide considerable advantages to both the local populations and the ecosystems that surround them.

According to Innovations Meta, finding and implementing fresh, creative ideas will be necessary to confront and mitigate the effects of climate change. To make the world more sustainable, it is researching MW and creating new goods and technology.

The Climate Conversation Map was introduced by Meta in 2019 to help academics and others track down and map global talks around climate change. Organizations will gain a better understanding of where, when, and how Meta users are interacting with climate news thanks to this map.

In order to improve access to dynamic, science-based climate information to raise awareness and encourage more people to take action, the firm introduced the Climate Science Center on Facebook in 2020.

To deliver facts, statistics, and data, Meta collaborated with the Intergovernmental Panel on Climate Change (IPCC) and its international network of climate research contributors. The UN Environment Programme (UNEP), the National Oceanic and Atmospheric Administration (NOAA), and the World Meteorological Organization are a few of the organisations that the Climate Science Center has acknowledged as contributors (WMO).

To better understand public opinions on climate change, Meta created the Climate Change Opinion Survey in 2021 in collaboration with the Yale Program on Climate Change Communication. Through Facebook’s Data For Good programme, the information, which was acquired in 31 nations and territories, is accessible to other researchers.