The California Condor (Gymnogyps californianus) has long been a part of Native American mythology. Some tribes believed that it was capable of killing human beings and drinking their blood, while others believed that, from time to time, it ate the Moon, which explained the lunar cycles.

Some groups ritualistically killed them to make ceremonial costumes with their feathers. But it was not that which has killed the condor (in 1981 its population was reduced to only 21 birds), but the hunting, the poisoning by pellets and the loss of wild lands that it suffered during the last century. Conservationists go to great lengths to save this bird from extinction with breeding attempts and captive breeding, but it is a difficult task. 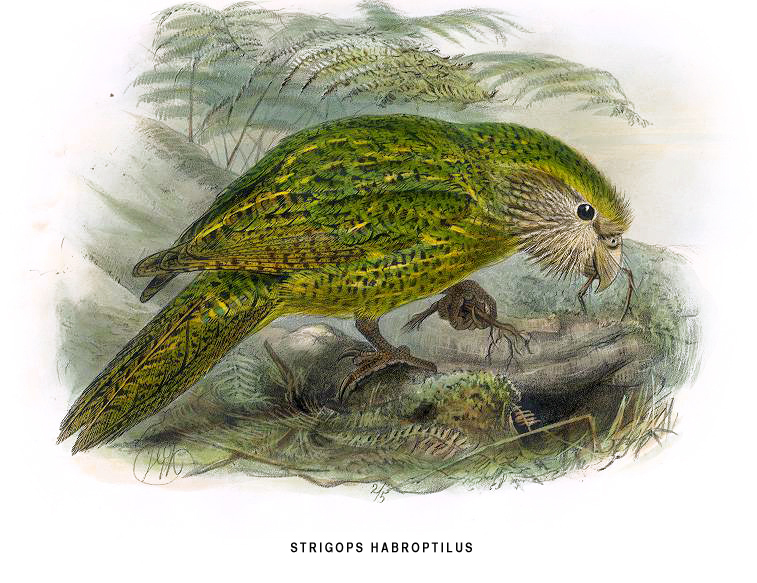 John G. Keulemans. Minor edits have been made to the original by User:Msikma; I release these changes into the public domain as well., Public domain, via Wikimedia Commons

The kakapo (Strigops habroptilus)from New Zealand, also called an owl parrot for its curious facial appearance, it is the heaviest parrot in the world. Large and stocky, it usually gains between 60% and 100% of its body weight when the breeding season arrives. Unlike typical parrots, which are chirpy, cheerful and fly, Kakapo is solitary and does not fly, as it has evolved in the absence of predatory mammals. Years ago, the species was widespread and common throughout the country, but hunting, the introduction of predatory mammals, the widespread burning of forests and the degradation of habitat by introduced herbivores have caused a catastrophic drop in their numbers. 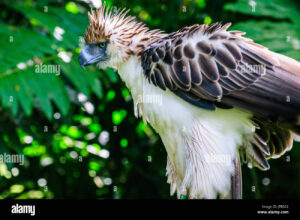 It is one of the largest and most powerful raptors in the world. Natives believed that the impressive Philippine eagle (Pithecophaga jefferyi) fed only on monkeys, but more recent studies have revealed that the species captures a wide variety of animals, from rodents and bats to pigs and monitor lizards. Endemic to the Philippines, it has been in danger of extinction for the past 40 years. The Philippines has named it a national bird, which has helped protect it better and improved its population.

Potoo are nocturnal animals with a plumage that during the day gives them the appearance of a tree trunk . They have a very small beak but their mouth is extremely wide, which helps them catch moths and other insects at night. They do not build nests, but lay their eggs on branches or broken trunks, although the main rarity of these animals is the appearance that their yellow eyes give them. Their wide open and surprised looking eyes give them a comical and terrifying aspect at the same time that will catch anyone’s attention. 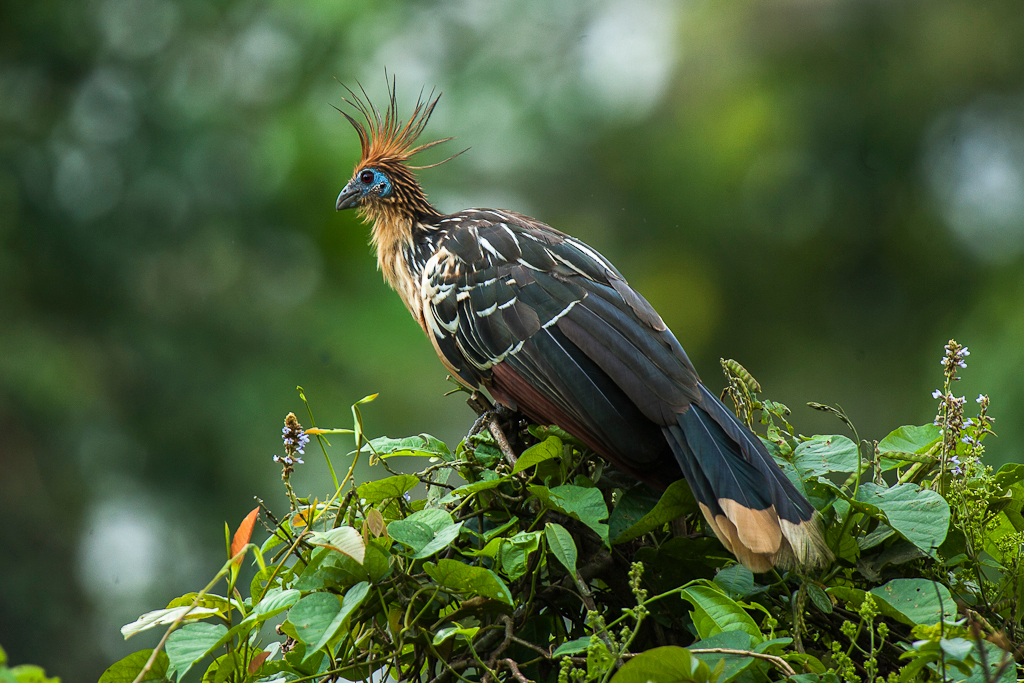 These birds have no living genetic relatives and are extremely peculiar. From birth to adulthood they have claws on the tips of their wings that they use to climb among the vegetation where they live. It is one of the few strictly herbivorous birds that exist and the only one with a digestive system similar to cattle. They spend hours perched digesting their food and the large size of their stomach makes it very difficult for them to fly. Another fun fact is that the young can swim when they are launched from the branches to avoid a danger and to climb again later but the adults cannot swim at all! 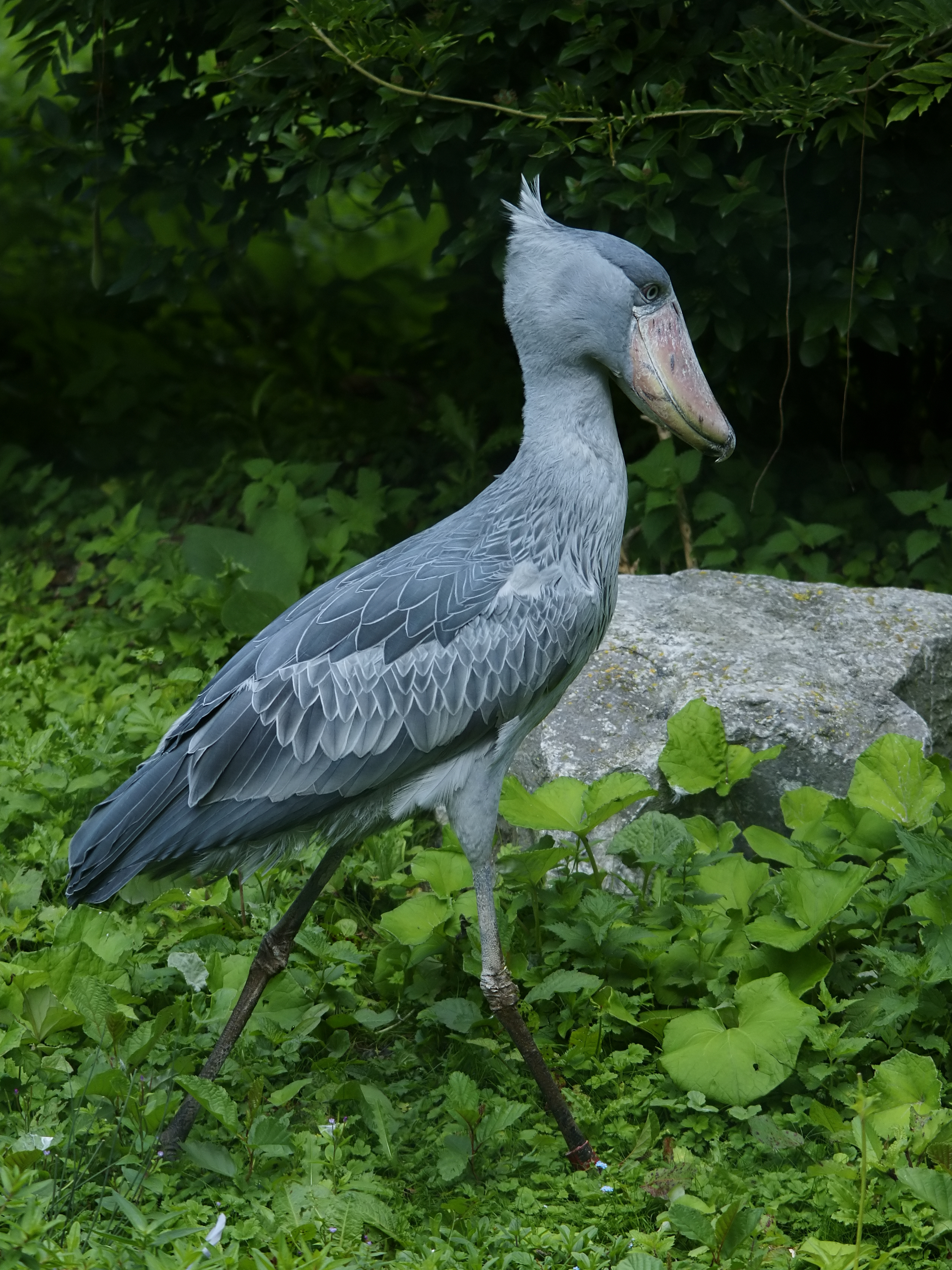 It is known thus by the shape of its beak, which is reminiscent of a shoe. In scientific circles, it is considered to be a relative species to pelicans, storks, or herons.

They are native to North Africa, where their diet is based on frogs, fish and toads. Currently, this species is in danger of extinction, so every effort is being made to protect it.

We consider this to be one of the strangest rare birds that we have researched, since it has a one of its kind of pouch in its throat, which is red in males and blue in females.

The most striking thing about this bird species is a large helmet that goes from its head to its beak. It feeds on fruits and insects. It also stands out for its squawk, reminiscent of a laugh. It is also an endangered species due to the hunters’ intention to capture it by its beak. 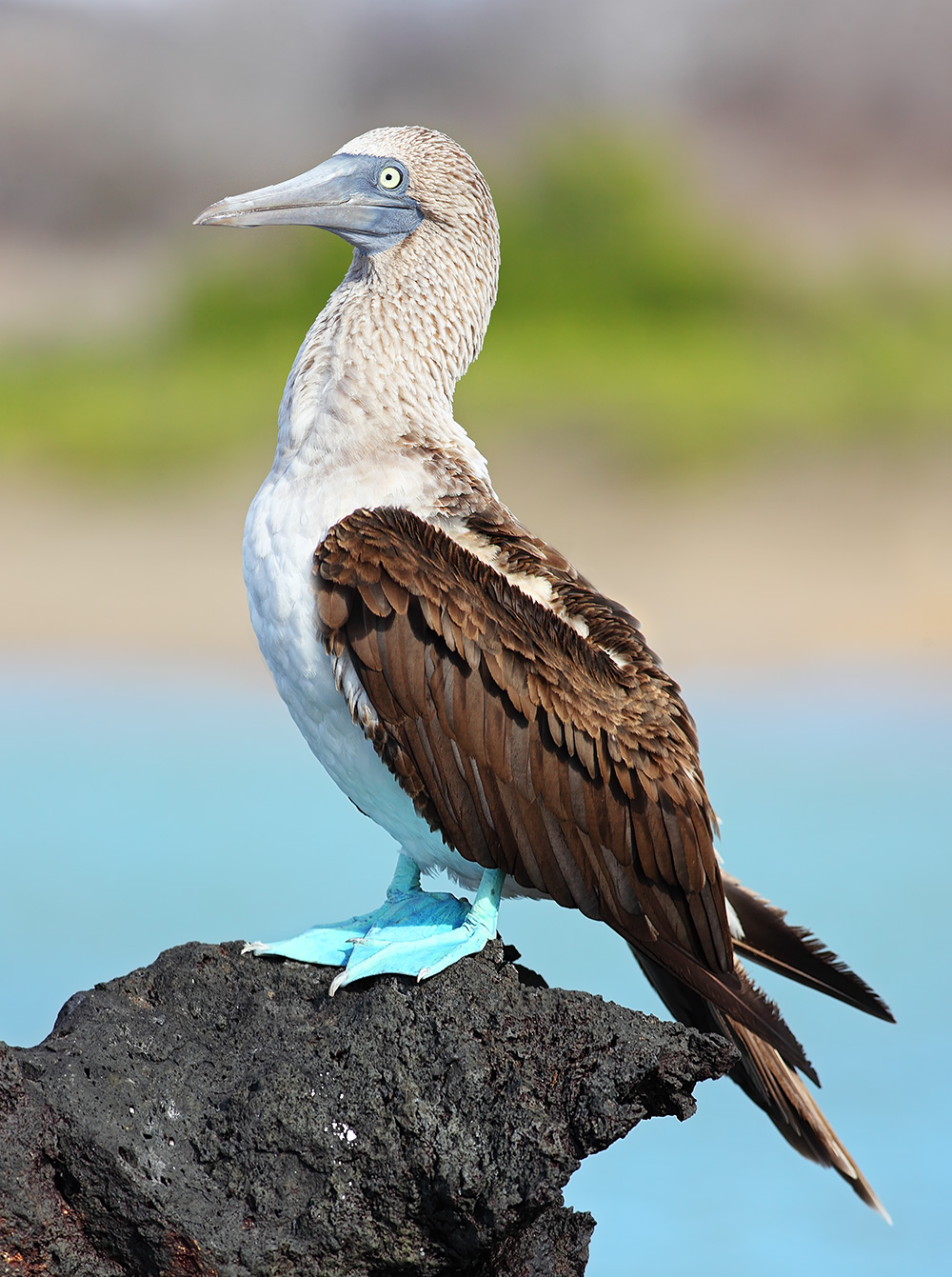 The camanay booby, blue-footed booby or blue-footed booby (Sula nebouxii) is a species of pelecaniform bird of the Sulidae family exclusive to the American Pacific . It inhabits the coasts between Peru and the Gulf of California, as well as the Galapagos Islands , where it lives with its relative, the red-footed gannet (Sula sula).

In the Galapagos, it was one of the animals carefully studied by Charles Darwin in his works on the evolution of species. The characteristic intense and bright blue color of their legs comes from the carotenoid pigments that come from their diet, since these birds are unable to synthesize carotenoids and have to assimilate them through food. 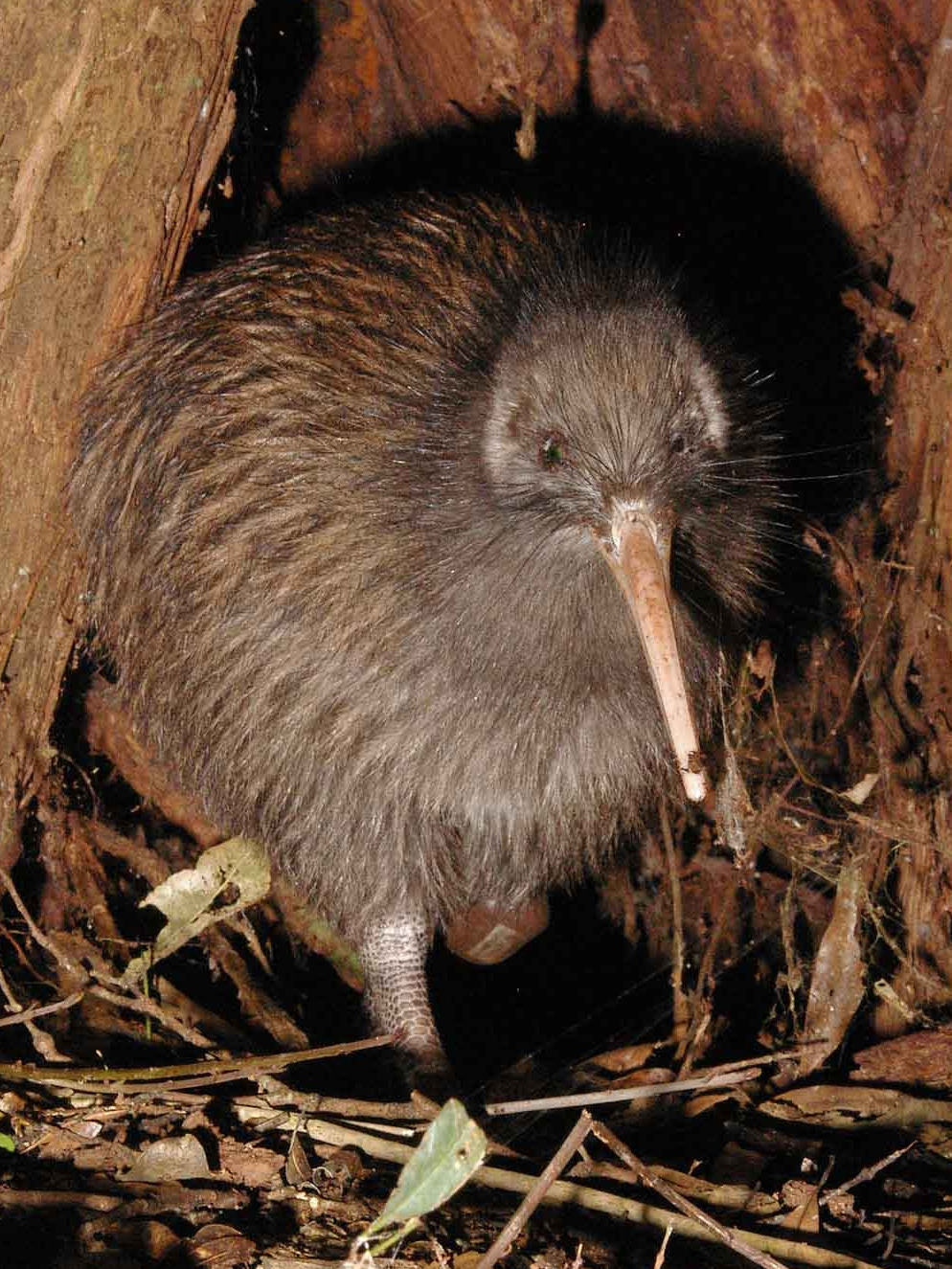 The common kiwi (Apteryx australis), also known as tokoeka, is a species of strutioniform bird in the Apterygidae family. Kiwis are a clade of paleognate birds made up of five species endemic to New Zealand. They are small flightless birds, about the size of a hen.

Interestingly, Kiwi birds have marrow in their bones just like mammals, whereas, birds usually have hollowed out bones to make them their flight easy and practical.

The Christmas frigatebird (Fregata andrewsi) is a species of suliform bird in the Fregatidae family, endemic to Christmas Island and in serious danger of extinction . It is a large bird, measuring between 90 and 100 cm. Black plumage, with a white belly and a white band on the upper part of the wing.

It has the characteristic tail of the frigatebird, strongly forked. The male has a red crop that swells in courtship, it also has a curved, dark gray beak. The female differs from him, in that in addition to the belly, her throat and belly are also white; its beak is pink; and has red around the eye. It only breeds on Christmas Island, although it sometimes feeds in the seas of the Malay archipelago.

The main reason for its decline and one of its greatest threats to its conservation is the destruction of its habitat caused by mining (phosphates). Other possible threats to the species are the introduced ant Anoplolepis gracilipes, which has spread throughout much of the island, and which has severely predated on crab populations, and by stochastic phenomena, such as cyclones.

previousDo Honeybees Sleep?
nextWho would die first of starvation – a fat or a thin person?