For many years experts have wondered how and why do starlings murmuration. The answer is not fully resolved but there’s a consensus that starling murmurations are defence against possible predators, such as a hawk, booted eagle or marsh harrier.

Are starlings the only birds that murmurate? 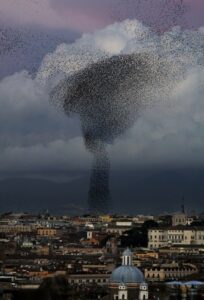 For predators, these formations reduce their chance of success during hunting with their continuous movements and constant change of direction. This misleads and confuses the predators. This strategy is similar to that of schools of fish, who travel in groups to avoid shark attacks.

How many birds are there in a starling flock?

These can be really dense flocks, which number tens of thousands of starlings – between 40,000 and 50,000. These high number of birds flying can almost turn the entire sky black. Their movements are decided in small groups, their immediate neighbors. One starling tracks 7 of its neighbors to direct its flight. These small groups synchornize with each other and on the whole you’d see thousands of birds in synchronized flight waves. 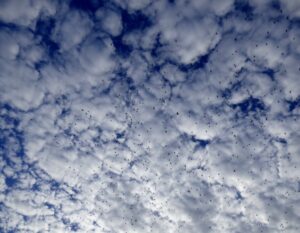 Beautiful and elegant they may seem, these starling murmuration do bother the society. This is because to their noisy behavior when they perch on the power lines and the trees, also the excrement they leave behind on those places.

At the same time, these flocks help get rid of insects and pests that, which is beneficial for the farmers.

When is the best time to see starling murmuration?

The impressive starling flocks can be seen throughout the winter above the forests, agricultural lands, parks, urban centers. These beautiful formations only take place at sunset, when the starlings are about to roost.

The huge flocks only form during the winter season because this is the time they are not tending to their chickens and are only concerned with own their survival.

The best place to see a starling murmuration would be near their roost. If you know where these thousands of starlings go to sleep at night, you can wait for the evening near that place to witness a spectacular murmuration.

How do starlings synchronize?

Communication is the key to a perfect synchronization in starling murmurations. When changing direction, the birds make a lot of what we perceive as noise. So the neighbor knows they need to change their direction too. Starlings might also follow the dark silhouettes of their neighbor and this is how they avoid hitting into each other during quick movements.